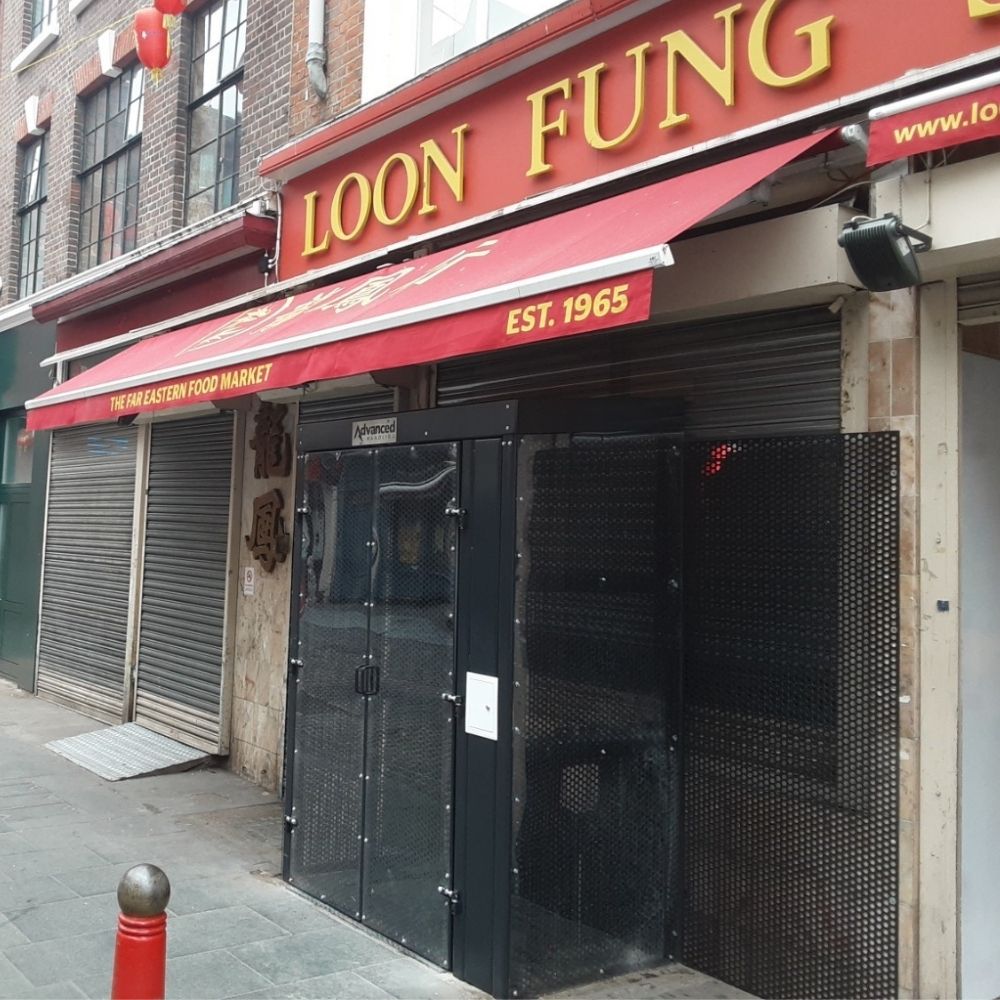 Upper level of goods lift was located on street level in a pedestrianised zone.
New lift had to integrate into the existing shaft & set-up.
Lift adapted to eliminate the risk of foreign objects falling down the shaft.

Who is Loon Fung?

Loon Fung, established in 1965, is a small chain of supermarkets specialising in Asian food products, tableware, and cooking tools. Their Chinatown site was one of the first Chinese supermarkets in the UK.

Loon Fung already had a goods lift installed which they used to transport their deliveries from street level down into their storeroom located the floor below the supermarket. Although the lift did the job, it no longer complied with up-to-date health and safety regulations and also due to heavy usage and exposure to the elements for extended periods, the lift was no longer working at full capacity, nor at its most efficient. Therefore, Loon Fung recognised that it was time to invest in a new lift they could rely on for years to come.

With this project, Advanced Handling faced a few challenges of their own. Loon Fung’s Gerrard Street supermarket is located right in the heart of Chinatown and their whole premises is surrounded by extremely busy streets and pedestrianised zones. This meant that it was only safe to install the lift during specified hours which also had to be scheduled around the supermarket’s delivery times to minimise impact on operations.

The entrance/top level of the lift was also on the pavement itself which comes with industry regulations which needed to be considered during the design phase.

Advanced Handling also had to apply for special licenses from the borough to have a vehicle and work within that area specifying exactly what work was being carried out and when which took time to be approved.

Initially, Advanced Handling visited site to see the existing set-up and to measure the area ready to quote for their new lift. This also provided an opportunity to identify how they could improve upon the old lift for Loon Fung to ensure they invested in a lift that better suited their needs and was future-proof.

Advanced Handling designed and manufactured a 1,000kg bespoke goods lift to travel the 2,950mm from street to basement level. Modifications were made to the design to protect the lift from unauthorised access (as it was located on a public street). This included a sloped lid so it could not be climbed on nor could anything rest on it and a perforated enclosure around transparent doors for maximum visibility whilst protecting the interior of the lift. The lift was also designed in such a way to minimise and eliminate as many open gaps as possible to prevent foreign objects falling down the shaft.

Loon Fung now has the peace of mind that their lift is compliant with the latest health and safety regulations. Alongside this, the bespoke elements Advanced Handling designed have further protected the lift against unauthorised access, vandalism and foreign objects entering its vicinity which on a public street was high-risk for the supermarket.